Angular is a framework web Application to build a web application software, which is becoming popular because of its unique features and ease to build an application. Angular 7 is an open-source ground-up rewrite of the AngularJS framework developed by Google. It completely relies on Javascript and HTML. It converts a static into a dynamic single-page HTML web application.

AngularJS is also known as “Angular 1.x” or ‘Angular.js’.it is the first version of the angular application framework. It is based on the scripting language of javascript.

In September 2016, angular 2 was released. It is written in Typescript. The major drawback of angularJS is not capable of supporting mobile apps, whereas Angular 2 is mobile-oriented.

It was a failure because of some versioning issues with the modules internally.

It was released in March 2017. The various enhancement provided in angular4 are ng-Template,Inbuilt Animation Package, Titlecase and Form Validator attributes, etc.

Angular 5 was released in November 2017. It emphasized the performance of the framework. It was smaller data size and faster as compared to the previous version of angular that is angular4. The various features included in angular5 are Multiple export aliases, Date, currency, HTTPClient API, Pipes for Number, and Lambda Support

It was released in May 2008. The various features came with Updation in an angular CLI command-line interface, and the release of angular 6, Updation in a Component development kit, and Angular Material.

It helps the users to make a decision & package also import using CLI command. And the CLI using about the type of styles and change the value of the checkbox “Y/N” and & changes directives, the user wants to use.

Reflect metadata was used in production but it is required at some time of development. Therefore, the polyfill.ts file is removed by default in angular 7.

Google accelerates Virtual Scrolling. It is the Angular 7 framework speed for a huge scrollable list. if we want to define the virtual scrolling Component Dev Kit ( CDK ), then it may unload the DOM elements or load and that stands on the observable condition of the list.

It comes with automatic rendering and Easy to use.

If the bundle data size is more than 2MB, a warning message is provided for above 5MB data and an error will be given.

What is Angular 7 Architecture? 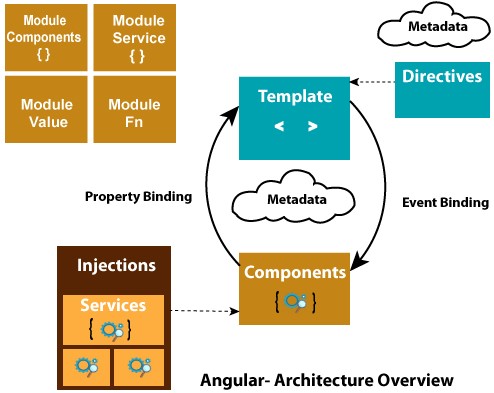 Various units are combined together to build an angular web application. Angular 7 is a tutorial that completes without its architecture and components are following:

The angular module is a place to group the various units related to our application such as services, directives, and components, etc.

It is a typescript class file in which you can create your properties, methods as per requirement and will be bound with the HTML web page to display the content to the end-user display.

It is a user interface of the angular application part. A template is the HTML web page that consists of the content that is being displayed at the end-user template view.

It is data about the data. Decorators are the metadata in angular.

It is the synchronization between DOM and data. There are two kinds of Data Binding in Angular 7 are transfer data using Property Binding and Event Binding

Directives are used for expanding the functionality of the HTML element. Directives in Angular are Attribute Directive, Structural Directive, and the Component Directive.

Services used to reuse the code & API call. This service creates code that is common for one or more components.

It is an object which receives other objects that depend on angular design patterns for enhancing efficiency and modularity.

Benefits of Angular 7 In Web Development:

Multiple benefits come with angular 7 that invokes users to use it as a framework for their web developments.

The unique features of angular web development are the major reason for its popularity. There are two major reasons one looks for while choosing a technology, One is the Job Opportunity and the second is the PayScale.

Companies look forward to a mean stack development. Being a part of mean stack web technology the various companies that work on angular are:

Angular 7 tutorial to make you familiar with the new version of this popular Angular framework. In the Versions of angular released till now with theirs. That’s why enterprise are love the Angular framework for building nontrivial applications, large-scale and each organization will have a slightly different set of reasons for why the framework is so effective for their teams. Angular in TypeScript feels familiar to someone one should learn it for career growth. The strength of the angular framework is that so many benefits are almost self-evident to enterprise developers and nature and that they can go unnoticed. A developer who has never had to wrestle a large-scale Syntactical Changes (ES5) JavaScript application to the ground while overcoming.

Thanks for your interest..
Please provide your details...